Bill Bock is at the Saxon Lutheran Memorial in Frohna, Missouri, replacing the windows of the two-story Fenwick Cabin built circa 1835. A direct descendant of immigrants who settled in the area in 1838-1839, he can speak German and has done some volunteering. at the memorial since 1961, when renovations to the site began. He is also a member of the memorial’s advisory board and was the contractor for the construction of the visitor center.

Bock visited Germany seven times, often to meet the German descendants of his ancestors. Bock says the man who now owns the farm his ancestors originally owned is the one who invited his family to Germany, locating them after searching for an 1833 inscription on the barn with their ancestor’s name. For many years Bock corresponded with a man living in Germany, with whom he was related through a mutual friend. Becoming friends, this man came to visit Bock and his late wife twice at their farm in Frohna.

Kathy School demonstrates an agricultural tool in use at the Saxon Lutheran Memorial on Tuesday September 11, 2018 in Frohna.

“Bock is pronounced ‘Buck’ in German,” explains Bock, taking a short break before installing windows. “In fact, my ancestor, Michael Bock, came, and his wife refused to come. They ended up separating and then divorcing. …He just felt like he couldn’t make a living there anymore. 1838 November is their departure. He was on the first ship.

Bock’s story is just one example of the pride the people of eastern Perry County take in their heritage and the effort they go to documenting it and passing it on to the next generation. The Saxon Lutheran Memorial is a living demonstration of this; it is made up of 15 buildings that can be visited, most of them original, including six 19th century huts, a working blacksmith shop and a machine shed housing many parts of early 20th century agricultural machinery. All of the buildings are from eastern Perry County, and the Twyman, Bergt and Josiah and Sarah cabins, the Twyman/Bergt barn, as well as the attic which now serves as a country store museum, are original to the property.

Just a six-minute drive from Altenburg, Missouri is the Lutheran Heritage Center & Museum, a collection of artifacts and history documenting German immigration to the area from the Saxony and Thuringia regions of Germany in 1838-1839. Carla Jordan, historian and museum director, explains that pastors immigrated for religious freedom. The people who followed these pastors to America, says Jordan, came mainly because they were craftsmen who lost their jobs in Germany because of the industrial revolution.

Four ships sailed to America; one was lost. Once the people of the three remaining ships arrived in eastern Perry County, they experienced the illness and betrayal of Martin Stephan, the pastor they had followed to the new world. After that, people, says Jordan, wanted to go back to Germany but didn’t have enough money. Through this trial of faith, CFW Walther became a leader to help unite the people. He also wrote a publication that connected Lutherans who had settled across America and eventually became the first president of Concordia Seminary, as well as the first synod president of the Lutheran Church of Missouri. Perry County is where this church, the second largest Lutheran body in the United States, has its roots.

The culture of these early settlers is still apparent today among their descendants in eastern Perry County.

Sent straight to your inbox.

“My elders here, people who are a generation ahead of me, still speak the language,” says Jordan. “This is an authentic microculture of America. And you don’t find that very often.

Warren Schmidt, president of the Perry County Lutheran Historical Society whose great-grandfather was one of the area’s founding immigrants, says the German language isn’t the only remnant of their ancestry.

“The work ethic of the people who came here is still there,” Schmidt says. “People here know what a good day at work is. In Perry County you have businesses that probably came to Perryville and established because it’s a great workforce.

Why are the people of eastern Perry County so proud to preserve their heritage?

“So we have it there to show our descendants,” Bock says. “This place is primarily designed to remember the people who settled here and the hardships they went through to settle in this area. And also since this relates to the beginnings of the Lutheran Church here in America, something something that I think is very important for the younger generation to learn, it’s also set up to show how people lived in the very beginning, something that got a bit lost over time.

Kathy Scholl, a volunteer at the Saxon Lutheran Memorial, agrees. 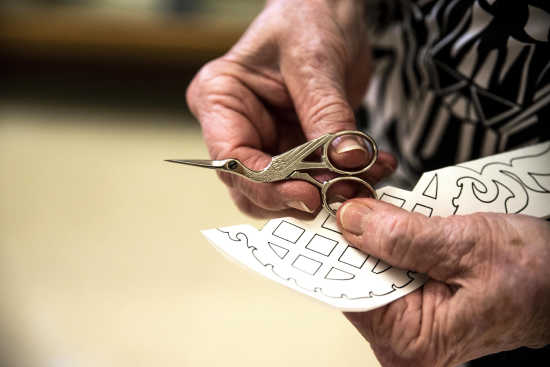 Kathy Schlimpert shows the scissors used for the sherenschnitte art form on Tuesday, September 11, 2018 at the Lutheran Heritage Center & Museum in Altenburg.

It means “scissor cuts” in English, and it’s something scherenschnitte. Artist and teacher Kathy Schlimpert of Altenburg, Missouri, makes sure her students can pronounce and spell correctly before grabbing a pair of scissors and a paper pattern. She says they often mispronounce the word, mistakenly using other words that begin with “schn-” rather than the proper name. Schlimpert periodically teaches his classes at the Riverside Regional Library in Altenburg, Missouri.

Kathy Schlimpert shows off a sherenschnitte piece in progress at the Lutheran Heritage Center & Museum in Altenburg, Missouri.

Schlimpert discovered the art about 30 years ago while trying to buy plastic flowers to get into floristry. While walking through the store, she saw a scherenschnitte kit with a design for a pineapple, bought it and, once home, discovered that she liked the craft. She never bought the flowers.

Scherenschnitte dates back to AD 200 in China, where it was invented and used on official documents. In the 1600s, the craft found its way to Austria and Germany, where newspaper was cut without a pattern for Christmas decorations. Finally, it came to America through Swiss and German immigrants in the 18th century.

It is because of her German history that Schlimpert’s scherenschnitte creations grace several display cases and Christmas trees at the Lutheran Heritage Center & Museum of Altenburg, Missouri. His most recent tree includes drawings of woodland creatures.

To create scherenschnitte, Schlimpert says the artist needs sharp-edged scissors and a paper pattern. The hand holding the scissors stays still while the paper is guided through the scissors. The artist should start cutting along the lines in the middle of the design and work outward or the paper will become too thin and difficult to hold. Sometimes, says Schlimpert, the artist will need to punch a hole in the paper to make the tiny circular cuts.

“It’s always quite interesting to know where you come from,” she says. “So I guess I have the scherenschnitte to thank for taking an interest in this.”